A review of Sam Roggeveen’s Our Very Own Brexit., originally published on GoodReads in November 2019.

How vulnerable is Australia to the disruptive political developments in other Western countries – Trump in the US, Brexit and Corbyn in the UK, and the electoral devastation of former ruling political parties across Western Europe?

Sam Roggeveen, from the Lowy Institute in Sydney (disclosure: I have known Sam for many years and we had a recent private online discussion about his argument in this essay), is cautious but sees significant political risks. As in other countries, the Australian political parties that have been the foundation of post-WW2 stability have shrinking bases of support, leaving them open to internal insurgencies and political rivals.

One symptom of the old political system’s weakness, a rising vote for independent and minor party candidates, has been present for a long time. I wrote about this, as did many others, in the early 2000s and last year my Grattan Institute former colleagues published a detailed analysis of the characteristics and beliefs of minor party voters.

Peter Mandler’s title, The Crisis of the Meritocracy, led me to expect another, yet another, critique of allocating too much status, power and wealth on the basis of academic ability. But Mandler’s book is much more interesting than that. It is a rich history of post-WW2 education in Britain, highlighting how public attitudes and public policy interact, with neither ever fully controlling the other.

Meritocracy’s original antonym was aristocracy or other class-based systems of allocation. It aimed to restrict the role of inherited privilege in distributing social goods for which ability is relevant. Meritocracy matches people with education and jobs based on their demonstrated skill, achievement, or evidence-supported potential. This version of meritocracy remains commonly accepted, despite disagreements over exactly what counts as merit and how much other criteria should influence merit-based decisions.

Although meritocratic practices increased the average competence of workers, hopes that meritocracy would create a more egalitarian society have not been fulfilled. Mandler cites the early 20th century Christian socialist RH Tawney’s belief that, due to God’s providence, ability was randomly spread. If that was so, meritocracy would over a few generations dissolve the associations between family background and life outcomes.

The first volume of David Kemp’s history of Australian liberalism told the surprising story of how, between 1788 and 1860, a penal colony became an early liberal democracy. In the second volume, covering 1861 to 1901, the new national constitution federating the six colonies gave Australian democracy deep legal foundations.

While democracy was strengthened, by 1901 liberalism was weakened. Liberal political movements were divided between protectionist and free trade versions. Both were challenged by utopian socialist ideas and a militant union movement. The unions acquired direct political influence as Labour MPs won seats in parliament (Labor does not drop the ‘u’ until 1912). Kemp’s third volume, A Democratic Nation: Identity, Freedom and Equality in Australia 1901-1925, chronicles further liberal troubles in the first quarter century of federation.

(This review is cross-posted at Goodreads.)

Theorists of the left and the right argue that there are tensions if not contradictions between democracy and capitalism. Left-wing theorists argue that business has undemocratic power, buying influence through political donations and altering policy by threatening to invest elsewhere. Right-wing theorists argue that democratic majorities vote for taxes and regulations that weaken incentives and undermine the efficiency of capitalist enterprises.

Judged by the normative standards of these theorists, these critiques have something to them. But judged by some other standard, such as elected governments maintaining capitalist economic systems with widespread high living standards over long periods of time, the ‘advanced capitalist democracies’ discussed in Democracy and prosperity: reinventing capitalism through a turbulent century, look very successful compared to other political and economic combinations. 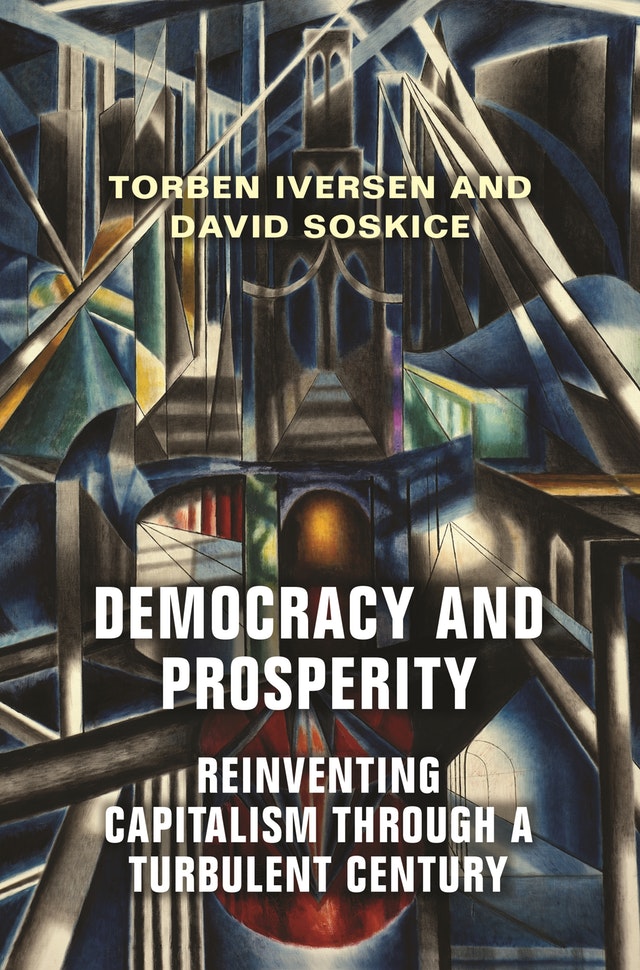 One contention of the book’s authors, Torben Iversen and David Soskice, is that a symbiotic relationship between democracy and capitalism contributes to the success of these countries. Although business and rich people may, at least initially, resist the increased taxes that democracies impose for social policy programs, often in the long run these programs contribute to economic success.

For example, education is electorally popular and provides business with the highly-skilled workforces they need. Government unemployment, health, and retirement programs reduce workers’ uncertainty about their future welfare, reducing short-termist behaviour and industrial conflict. Workers are less dependent on their employers.

In turn, key constituencies in advanced capitalist democracies depend on a successful economy for their own jobs and the tax revenues that support social programs. They support political parties that competently deliver economic growth, limiting the political potential of parties that would damage the capitalist economy. The rejection of Jeremy Corbyn’s Labour in Britain is an example. END_OF_DOCUMENT_TOKEN_TO_BE_REPLACED

(This is cross-posted at Goodreads.)

The Light that Failed’s first sentence says ‘the future was better yesterday’. And so it was. Thirty years ago there were high hopes for the future of liberal democracy, especially in Central Europe, which had just peacefully ended communist rule. But that is yesterday’s future, replaced now with Central European governments dismantling liberal democracy, authoritarian regimes in Russia and China causing trouble around the world, and many established liberal democracies suffering from serious political dysfunction.

In trying to explain what is going on, The Light that Failed: A Reckoning, reads to me more like a pre-20th century political classic than contemporary political analysis (one of its authors, Stephen Holmes, has previously written excellent books on the history of liberalism and its critics; I have ordered the English-language books of his Bulgarian co-author Ivan Krastev). The Light that Failed has evidence and examples, but not the relentless facts and data of recent journalistic or academic accounts. Instead, its contribution is the categories it uses to understand events and its psychological insight. 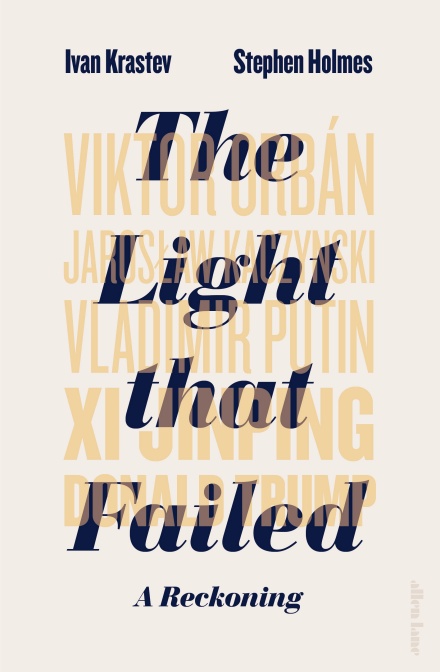 The book’s central concept is imitation. Individuals and societies are always copying each other, but this process can be experienced in very different ways. In Central Europe, the first post-communist political leaders and many of their people wanted to imitate the West: democracy, individual freedom, a market economy. And a triumphalist West wanted its model to be imitated; including in countries where the political elites and many of their people were not asking for advice. END_OF_DOCUMENT_TOKEN_TO_BE_REPLACED

The commenters on yesterday’s campaign finance post think that big ad campaigns don’t always work. That’s certainly the finding of the US literature on this subject – not that money never makes a difference, but that it interacts with so many other factors that there is no stable or predictable relationship between political spending and political outcomes.

Generally speaking, I believe the chances of any campaign over-turning stable elements of public opinion in the short to medium term are very low. The Howard government’s propaganda campaign on WorkChoices was doomed because the unions could tap into deep elements of public opinion. The importance of the union campaign against WorkChoices wasn’t that it changed minds, but that it kept the issue in people’s minds until polling day.

The more interesting campaigns are on unfamiliar issues, where public opinion is to a certain extent up for grabs. The mining tax was an example of this. Given existing tax and spend polling the issue could have headed in several directions if it had continued – we are generally in a pro-tax part of the political cycle if consequent spending the public approves of is emphasised, but opinion is also highly sensitive to situations in which workers may lose their jobs. Another factor in the mining tax case was that the government advertising in response to the miners was terrible, an off-putting lecture that did not hit existing pro-tax intuitions. END_OF_DOCUMENT_TOKEN_TO_BE_REPLACED

Katharine Murphy’s Age column yesterday attacking big ad campaigns against government policy is the third such argument I have seen from journalists in the last six months or so. George Megalogenis made a similar argument in his Quarterly Essay (though for reasons I did not entirely follow, he thinks campaigns are ok after laws have been passed), and Peter Hartcher argued that ad campaigns threaten economic reform.

We have a choice. We can either bump along and slide into a combative political environment where vested interests set the agenda, or we can stop, think and consider the alternatives.

Should there be full public funding for elections, ensuring that politics is left to the politicians? Should we require truth in political advertising?

Or should we do nothing, and wake up in a decade to find that politics can’t do anything; that politics is now solely about carving up the spoils, that reform has become impossible?

Though I strongly disagree with the Murphy’s views, she does more or less correctly describe what campaign finance reform is about. Its purpose and effect is to insulate the political class from the views of those who disagree with them or might challenge them. END_OF_DOCUMENT_TOKEN_TO_BE_REPLACED

The annual Australian Electoral Commission donations data dump was today, and I have collated the figures for the ‘political expenditure’ requirement.

The current rules were introduced by the Howard government in its lost-the-plot last term (I have extensively critiqued the law here). Their intention was to make life more difficult for left-wing ‘third parties’, and as can be seen from the table in most years left-wing organisations massively outspend right-wing organisations.

2009-10 was the first time since these disclosure rules came into effect that business groups outpsent the union movement. All of the declared spending of more than $22 million was by mining interests, presumably on opposing the planned mining ‘super-profits’ tax. END_OF_DOCUMENT_TOKEN_TO_BE_REPLACED

I’m working on a CIS paper on political donations, so today’s lead Age story on the biggest ever donation to an Australian political party caught my eye. Wotif founder Graeme Wood gave the Greens $1.6 million.

Despite this, Greens leader Bob Brown is calling for donations to be capped at $1,000. Remarkably, he seems to understand that – like virtually all electoral ‘reforms’ – donations caps are attempts by existing political players to rig the system in their own favour:

‘”‘…the Greens are going to continue to get a disproportionate increase in funding,” he said.

“Maybe it will be that factor which will get one or other of the big parties to bring in restrictions on political donations.”

Exactly. As Bradley Smith argues in his book Unfree Speech: The Folly of Campaign Finance Reform, political newcomers often find it hard to raise money through small donations. They frequently lack the strong organisational base needed to tap into networks of many donors. END_OF_DOCUMENT_TOKEN_TO_BE_REPLACED

The Australian this morning reports Michael Chaney’s comment that ‘thin-skinned politicians’ are creating a culture of ‘consequence and retribution’ for businesspeople who speak out on policy.

Unfortunately he did not name names or give examples. These instances may not in reality be frequent. But the perception that the danger exists has a chilling effect on public debate.